Is the art of using a pen and note book dying?

Traveling around the D-Day beaches made me pause for thought about just how different the records would have been if electronic records (emails etc) had been kept rather than traditional pen and paper?  Would many of us still treasure troves of beautiful love letters written by our parents (and grandparents) such as Janie Emaus discovered.  Would J. D. Salinger have completed ‘Catcher in the Rye’ had he not carried the manuscript in his backpack?

Looking at the beaches and conditions which our troops braved, made me wonder how well a mobile device like an iphone would have endured.  After all there were no sockets for recharging such devices then, no wifi (or 3G to send our messages) and wet devices as we all know are prone to failure.  Whereas pen and paper can be used anywhere and in the most adverse weather  (witness Scott’s diaries). 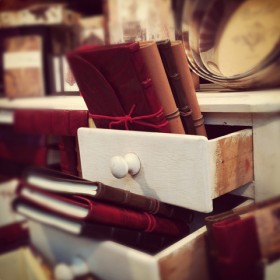 With pen and paper whether to write a love letter, diary, one feels compelled to think before hitting the paper after all who wants to send a document with lots of crossing outs.  Moreover, it is very much more personal and definitely one to one unless of course you send carbon copies.  Additionally there  is the whole art of graphology  and what your writing says about your character.  All this is missing from email and texts.

Yes, clearly electronic messages can be preserved but somehow an email does not feel as interesting as a well preserved letter (document).  Emails lack the tactile attributes which certainly for me make old letters look and feel so interesting.

With email of course there is always the danger of sending your love letter to the wrong person and ending up on gardening leave as has happened to many a person.

Whilst many organisations are working hard at creating paperless offices, for myself and many others, pen and paper still have a role and especially for the more emotional communications such as love letters, diaries and thank you notes to someone who has gone the extra mile.

Indeed the fountain pen is becoming as much a status symbol as the latest electronic devices: Mont Blanc has just re-released the original Meisterstück 149 which has been used at one time or another by many leaders from J.F. Kennedy to Barack Obama.

Even in meetings I confess to working with a fountain pen and beautiful leather bound notebook from BomoArt.  It does not need any electricity (or wifi), it works every time I open it, is often quicker to find jottings in than on my ipad, and there is no chance of being distracted by seeing new emails!  And it makes me stand out from the crowd.  Call me old fashioned, but I feel as efficient as all my colleagues.

The expectation of a fast response contributes significantly to email overload and can cost business dearly. Below is the full press release and key data.

A quarter of us now expect response to email within an hour – leading to errors and stress says new survey.

Technology is accelerating email response times, creating unrealistic expectations, email overload, errors and costly workplace stress*. Author of Brilliant Email and email management expert, Dr Monica Seeley points out that a few years ago a response to an email was expected within a few days or even a week. However, her recent survey reveals that today a quarter of us expect a response within the hour. Over a third of us, within two hours and over two thirds within half a day. Only a quarter of us think a response within one day is acceptable and only seven percent of us are prepared to wait two days.

“Today’s ‘always on’ culture of email, smart phones and social media means we expect almost instant responses to our communications. We pressure ourselves into thinking that most email has to be answered and often as soon as it arrives. But like driving, the faster we respond, the more damage we do when we make a mistake. We are confusing speed of email response with effectiveness and allowing technology to dictate and potentially damage the way we work. This survey highlights the need to reduce email overload and to make email reply expectations realistic with sufficient time for a considered response,” states Dr Monica Seeley.

Garth Ralston, Business Intelligence Development Manager for Aimia who manage large customer loyalty schemes like Nectar and Aeroplan agrees. He is introducing an email etiquette scheme across his division giving guidelines on email conduct including expected response times. “Most of us now have Blackberries or iPhones making it easy to interact 24×7. As a result, even if you don’t reply, the general presumption is that you will have read the message whatever time it was sent. In the office, the speed of expected response is even more acute. I sometimes get a phone call just 20 minutes after someone has sent me an email to see what I think of it. I also receive meeting requests 20-30 minutes before a meeting and the inviter is surprised when I don’t attend. Our email etiquette sets out rules we will aspire to follow i.e. people should not expect a response from an email they send before the following day. Similarly as a receiver if they need more time to respond fully they should send an email to confirm receipt and state when they will reply.”

Monica Seeley explains that much of the pressure for fast replies is in the mind of the recipient saying many senior managers tell her they are surprised by how quickly people respond to their emails. This is borne out by the survey which shows that most respondents (83%) felt that internal senders expect a quicker reply than external senders and (87%) believed senior managers expected a faster response than junior managers. Similarly, over three quarters of respondents strongly believed (76%) that people picking up email on smart phones such as Blackberry or iPhone expect a faster reply than those dealing with email on a conventional PC/laptop.

The survey, among one hundred respondents from a range of leading public and private sector organisations also highlights double standards around email response times. Although, most of us now expect a response within half a day – almost two thirds (60%) of respondents admitted they only sometimes left people sufficient time to respond to their emails and only a third (39%) of survey respondents thought they ‘frequently’ left enough time. Monica says; “This is a worrying trend, as emails often need a substantive response – data needs collecting, case law needs referencing and the faster we respond, the faster the other person will expect a reply.”

The IT Director of a leading retailer of luxury goods agrees adding; “Our customer facing employees and their email response times are driven by the level of service people expect from a premium brand. However, speed of response should not be confused with quality service. We were aware of a lack of consistency in speed and depth of response between internal senders and some unrealistic reply expectations particularly between those juggling customer requirements and the internal people they needed information from. So we are changing our culture and setting realistic expectations to get consistent and appropriate response times externally and internally.”

To help combat unrealistic expectations and unnecessary emails Monica Seeley advises people to improve their email etiquette. For example by including a line in their email signature stating that they check their email at regular intervals but not as each email arrives. Alternatively she advises the use of an auto response with the same message. Similarly she applauds organisations that have a statement on their customer service webpage stating how soon they will reply i.e. within three days. She recommends that businesses start adopting similar frameworks for every day emails, especially internal ones.

“Respond in haste and repent at leisure has been the mantra of many who have found their email used as evidence in a dispute. A wrong or unplanned response can be costly. This survey confirms my view that it’s time for us all to recalibrate our email expectations and reply times.” concludes Monica Seeley.
– ENDS – 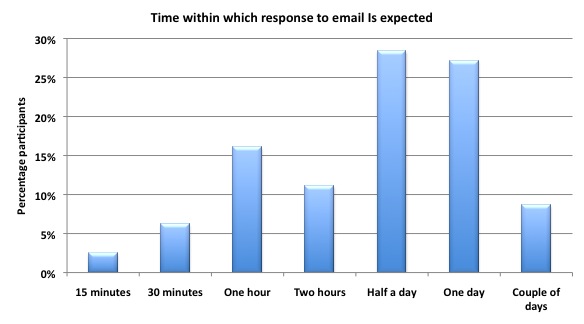 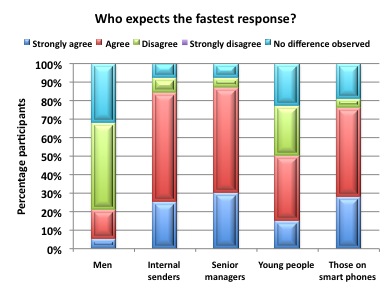 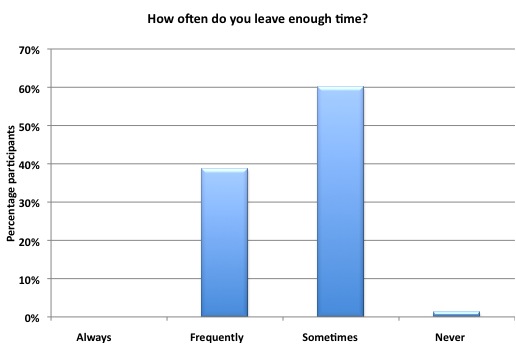